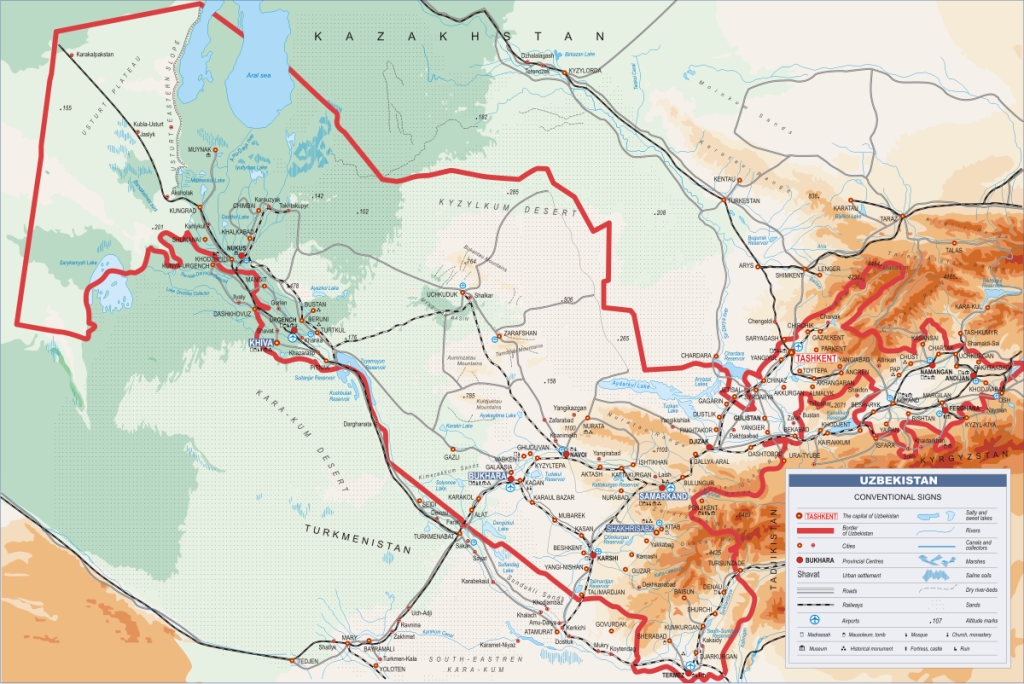 Formal name: The Republic of Uzbekistan

Location : The Republic of Uzbekistan is situated in the central part of Central Asia between two rivers: Amu Darya and Syr Darya. There are Turan Lowland in the northwest, and Tien-Shan and Pamir-Alay mountain ridges in the southeast of the territory. Kyzyl Kum Desert is in the North. Uzbekistan borders Turkmenistan, Kazakhstan, Tadjikistan, and with short distance with Afghanistan in the south.

Landscape: Most of the territory of Uzbekistan is occupied by plains (about four fifth of its territory). One of the main – plain is Turanianlowland. To the east and north- east of the country there are ranges of the Tien Shan and Pamir, here – the highest point of the country ( 4643 m). In the north central part of the territory of Uzbekistan is one of the largest deserts in the world – the Kyzyl Kum.

Uzbekistan, like other Central Asian states, is featured by a relatively ” young” population and a high proportion of people of working age. The share of those below working age in the general population is 39%, of working age – 54 %, of retireds – 7%.

Administrative and Territorial Structure:  12 regions and Autonomous Republic of Karakalpakstan.

Climate: The climate of Uzbekistan is extremely continental with a great number of sunny days. Average monthly temperature in January is from 10 to +3oC. Summer is hot and dry. Average monthly temperature in July is from +35 to +45oC. Autumn is warm enough and is the season when delicious fruits and vegetables are in abundance in numerous bazaars (markets). Average annual temperature is 13oC. The amount of precipitation is insignificant, which makes agriculture dependent on irrigation.

The best period for travel: from mid March till mid June and from August till end of October.

Treasures of the Timurid Empire - Uzbekistan 2023