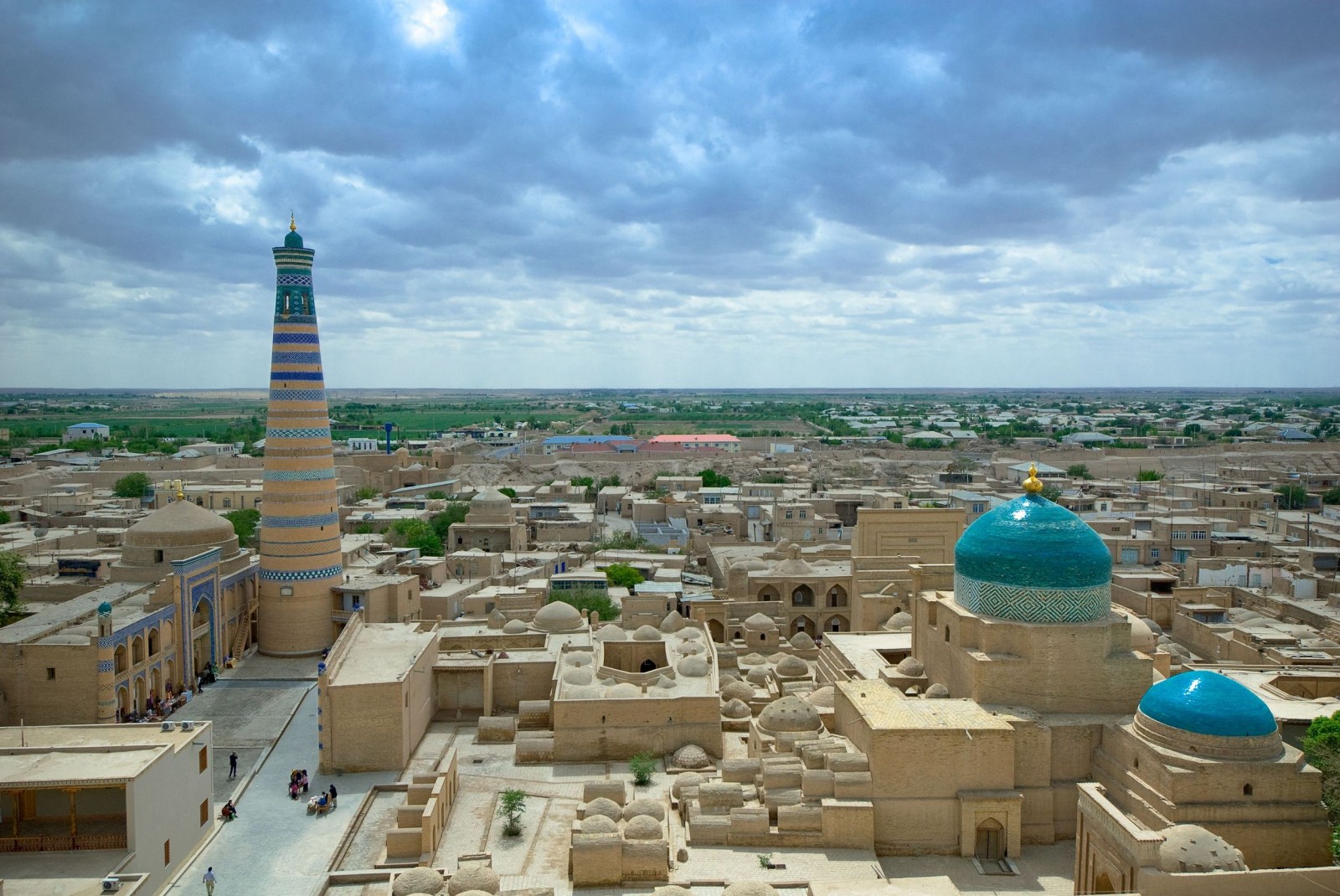 Khiva is known as a museum city under the open sky. It existed as a town for about 900 years, but was developed the settlement as it is seen today only by the 19th century, when it was the last oasis on the northern Russian slave trade route. One can wander through the narrow streets of Khiva, peeking in to the small courtyards through the wooden carved doors. The life inside the gardens assures the visitor that it is not just a museum, but also a living city.

Today, Ichan Kala is the city museum under open sky build, which was restored in the way it looked several centuries ago. The inner town is surrounded by high clayed walls with four gates pointing out the four sides of the Universe.

The most considerable architectural monuments are well preserved. You can start your tour from the Western gate of Ichan Kala, Ata-Darvaza. It was destroyed in 1920 and reconstructed during in 1975. The most ancient part of the city is the fortress Kunya Ark. The wall around the fortress was built in 17th century. It separates the fortress from the housing estates. Inside the fortress were mainly located the palace, arsenal, offices, the mint, and mosques.

The madrassah of Muhammad Amin Khan (1851-1852) is the largest madrassah in Khiva. It includes the auditorium, cells, winter and summer mosques and a library. The architectural works have been carried out in national Uzbek traditions. It has the five cupola entrance and the square yard surrounded by cells located in two storeys. The brick mosaic was used in the decoration of the facade. The wood carving of the entrance door, balconies, and windows are natural attraction for tourists.

In the plan, Khiva was a settlement of irregular outline, stretching from the west to the east and extending outwards on its eastern end. From the south to the north the distance between the extreme points of the contour of the walls of the outside Dishan-kala was about 2.5 kilometers in length and 2.5 kilometers in width. In the center of this territory was the inner town Ichan-kala with its location on the east. Its area was fifteen times less than the total area of the town square. The Ichan-kala, elevated over the suburbs, was constructed according to the ancient traditions of Central Asian town planning, as in many other towns.

The walls of the Ichan-kala with a height seven or eight meters were made of rows of pakhsa and in the lower part they were made of large adobe-yolks. Along the perimeter of the Ichan-kala walls, massive round towers were constructed at approximately every thirty meters. The gates and walls of the Ichan-kala are examples of fortifications from the middle ages, which are yet preserved today. The Dishan-kala did not have the characteristic, outwardly protruding, radial-circled configuration, as Tashkent did, for example. The network of town blocks which surrounded the Ichan-kala, with their complex layout were oriented towards its walls and the arteries of roads and water canals, which cut through the town.

The inhabited areas of the Dishan-kala were concentrated at the lower part of the northern, eastern, and western facades of the Ichan-kala. The western part was covered with ploughed fields and gardens of the nobility. Only one large and full-flowing arik (small man-made canal), the Sirchali, went around the town from southwest to northeast with its branches on the territory of the Dishan-kala. From the north, the current of the Palvan-yab arik limited the outline of the Dishan-kala walls, and from the south the Zakkash canal bordered it. These water lines served as natural boarders of fortification for the inner circle of the town walls.

It is a unique monument town, completely preserved in the cultural style of the region where nowadays about 50 ancient historical monuments and more than 250 ancient traditions houses are located. In 1967 it was proclaimed a town-reserve and since 1990 Ichan-Kala was recognized by UNESCO as an historical monument of world significance. 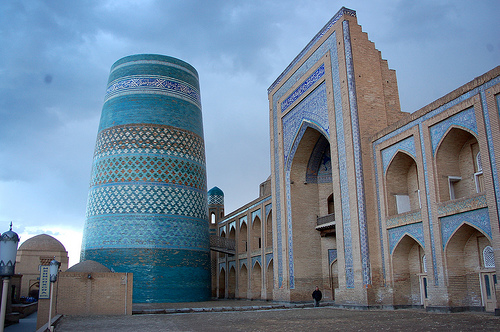 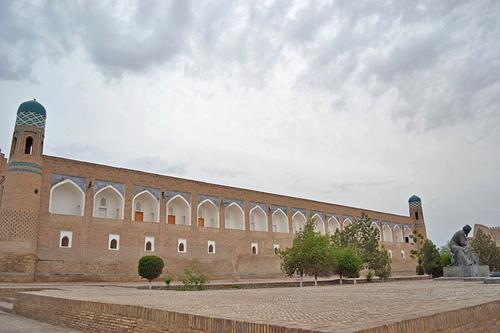 The Muhammad Amin Khan Medressah is the biggest medressah in Khiva. It was built in the years from 1851 to 1855. The Medressah, which has 72 meters in the length and 60 meters in the width, was the main building at the western gates of Ichan Kala, inner town. 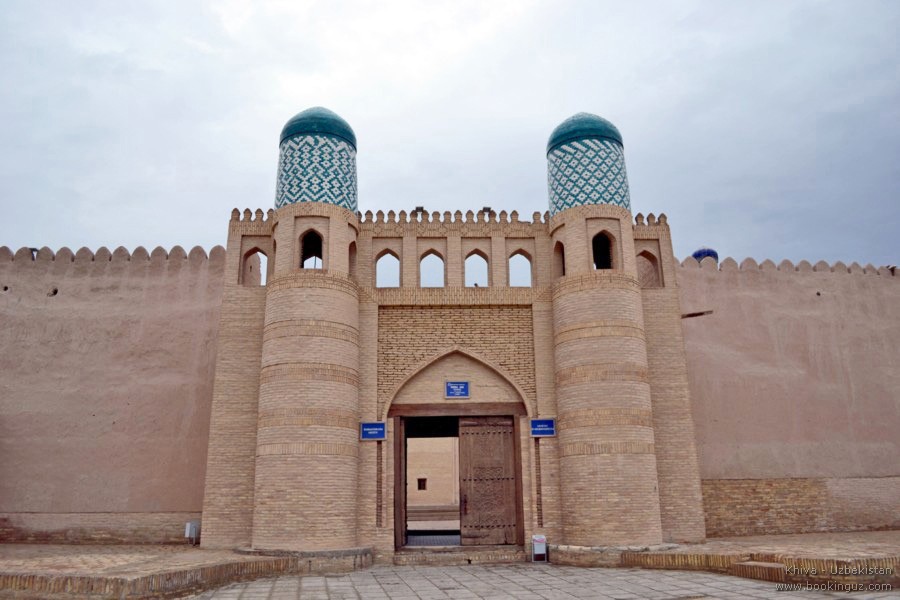 The western gates lead to the first castle of the city, Kunya Ark. It was built by the Khiva Khan Muhammad Erenk Khan in the 17th century. By the end of the 18th century Kunya Ark was separated from Ichan Kala and became a city. Like other cities, it had the Khan mosque, the Khan residence, the court, the Khan hall called Kurinish Khana, several military factories and buildings, the mint, the chancellery, the Khan private residence, the kitchens, the stables, and other attributes of the city.

The throne of the Khan was in the veranda consisting of two grand columns in the south part of the Khan Hall. The tent, where the Khan received the guests, was raised in the middle of the Hall. The western part of the Hall had the Khan treasury and the manuscripts archive. The veranda was decorated with majolica in blue, white colors and fascinating ornaments. 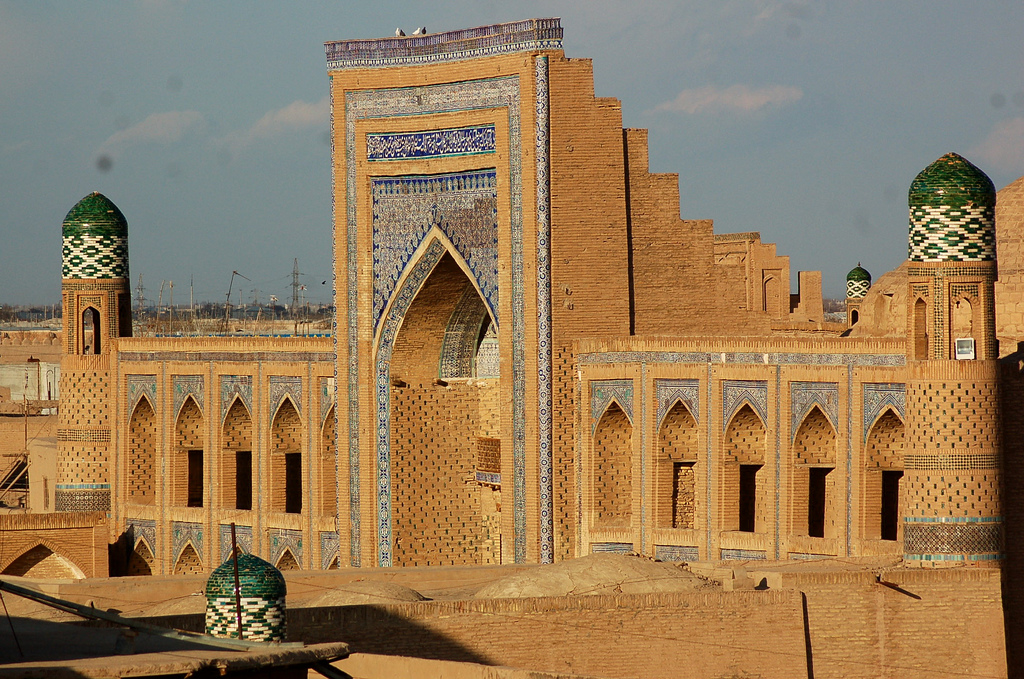 The Muhammad Rahimkhan Medressah, one of the biggest mosques in Khiva, was in front of the castle Kunya Ark. It was built by Sayyid Muhammad Rahim Khan (Madraim Khan II) in 1876. The building resembling the symmetric rectangle had a four-veranda yard with small towers in its angles.

The mosque corridor consisted of 8 exits with stairs to the cupolas. There was a restricted trade area with its warehouses at the entrance of the building. The medressah was a two-storey building, which had cupola shaped classrooms and accommodations. 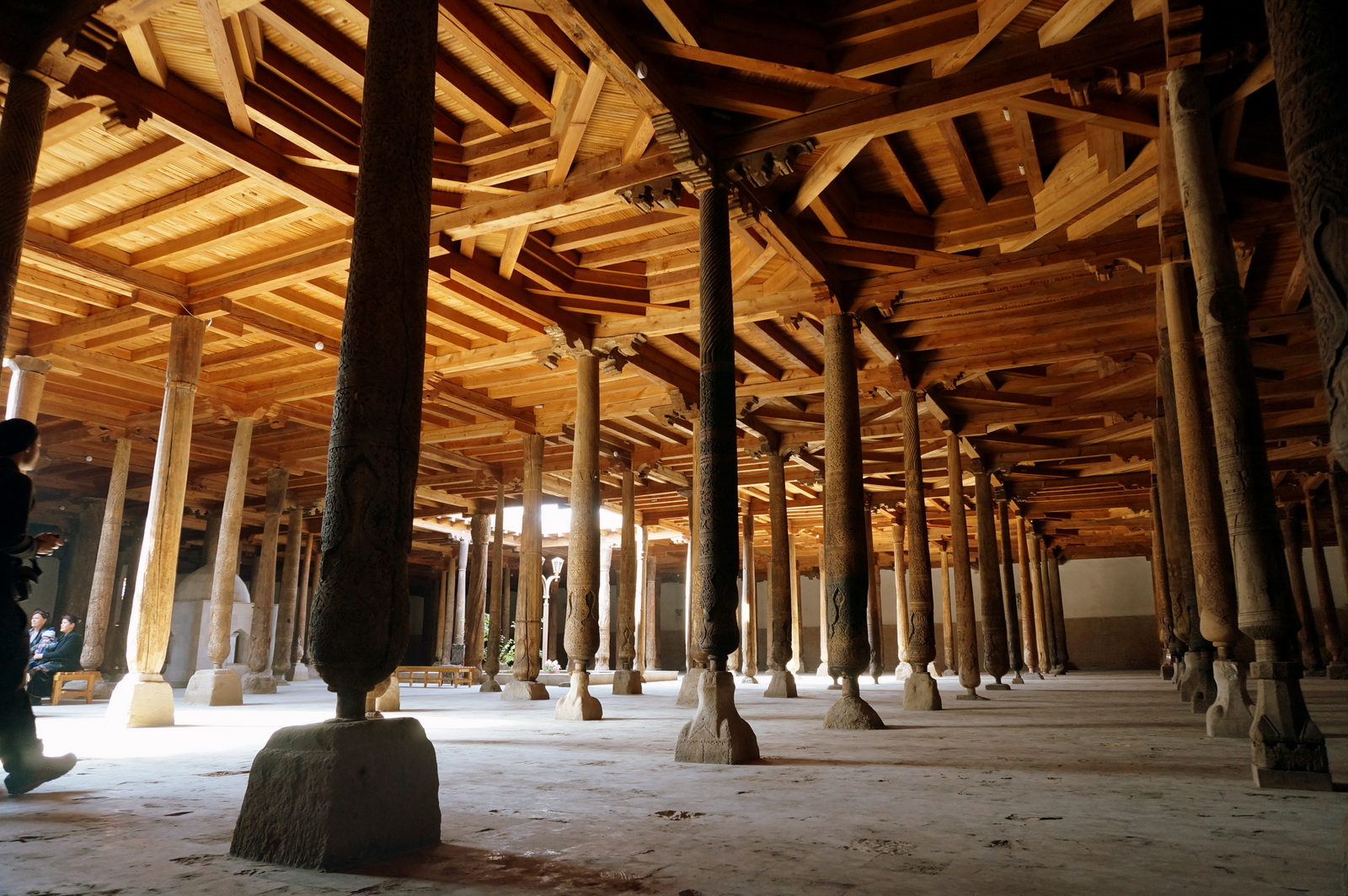 The Juma mosque was built in the 10th century. It was re-built by Abdurahman Mehtar, a Khan high official, at the end of the 18th century. The mosque, which had 212 columns, offered the Friday prayer to the city. Inside the mosque there was a marble board displaying its properties and incomes. Two main roads of the city crossed each other at the Juma Mosque place. 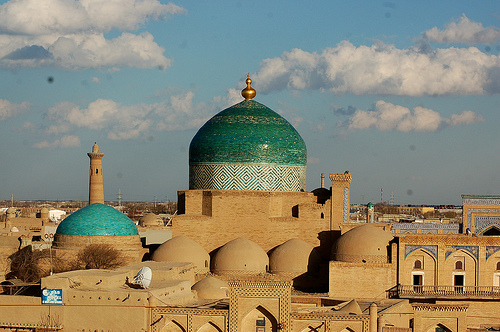 At the end of the 19th century another four buildings and the Medressah Yakubbay Khoja were built around the complex. In 1913, a two-storey building that had the graveyard of the Khan Isfandiyarkhan was built in front of the complex. 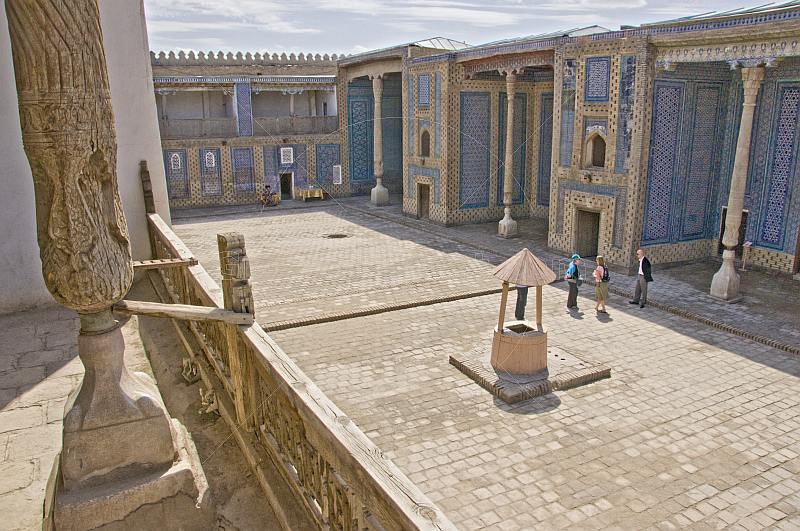 The Tash Khovli Palace is located at the eastern gates of Ichan Kala. It was built gradually during the years from 1830 to 1838. Construction of the Khan private residence was completed first. It was separated from the other part of the palace by the long corridor. The Khan residence had a veranda and a yard. 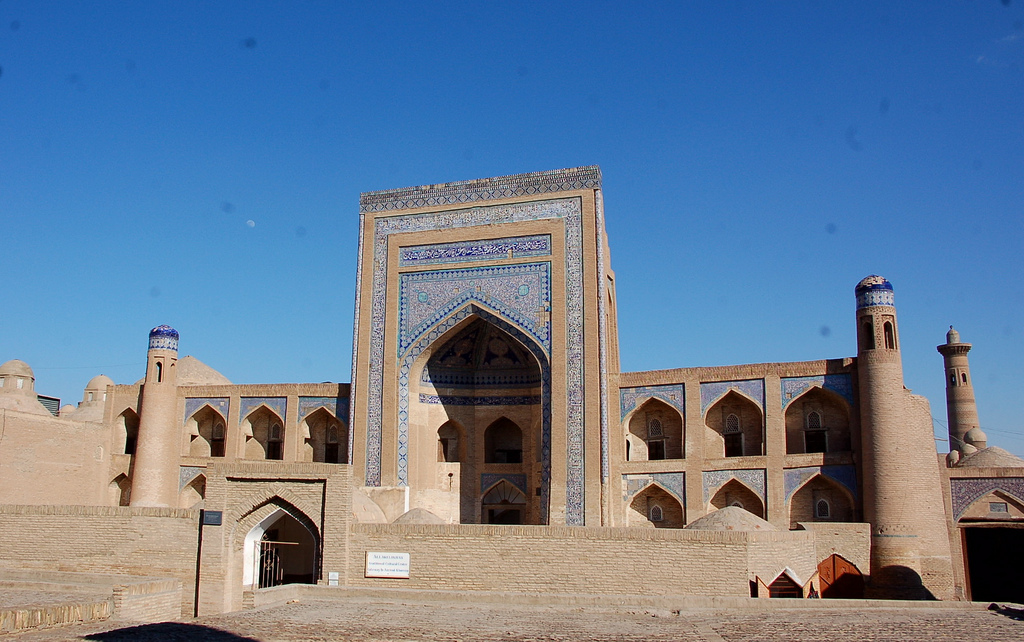 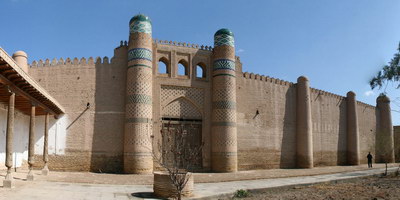 The palace of Nurillaboy is in the northwestern part of Dishan Kala. It was built by Muhammad Rahimkhan II for his son and heir Asfendiyarkhan during 1906-1912. After the Bukhara palace of Sitorai-Mohi-Hosa, the palace represents an eclectic mix of Khivan and European architecture.

The palace includes the reception hall of Asfendiyarkhan, courtyard, living quarters and medressah. German colonists participated in the decoration of the ceilings, windows and parquet. Decorative ceramic tiles were manufactured in Saint Petersburg. The original interior of the Khan’s reception room is decorated with carved ganch, gilding and multi-colored paintings. 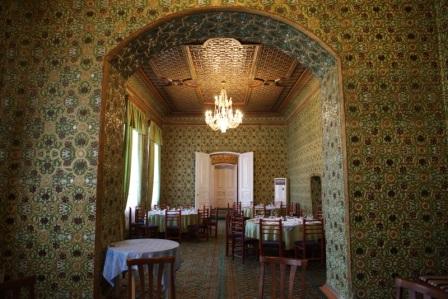 Travelers wishing to visit the famous summer residence of the rulers of Khiva have to cover just two kilometers away from Ichan Kala. The complex is located on the territory of just 0.5 hectares. A well-known palace in the country, built during the reign of Kungrad Dynasty is located here. Historical documents indicate that the residence was built in 1897. The main inspirer and sponsor of the building was Muhammad Rahimkhan II.

In 1864 he formally ascended the throne, becoming the eleventh ruler of the khanate. During the epoch of his reign a set of socially significant for the city buildings were constructed. His most famous creation is the medressah of Muhammad Rahimkhan II. Without false modesty, we can say that it is the largest in Central Asia today.

The decision to build a summer palace was made by the ruler in 1897. Kibla Tozaborg became a palace complex, which included 3couryards each of which is of a different size. Each had its own 2-storey houses decorated with wooden columns. Also the courtyards were equipped with cozy ayvans (terraces) used for the leisure of the ruler and the nobles who lived in the palace. In the vicinity of the palace there are several household buildings.

In the central part of the first courtyard there is an artificial reservoir, built in the form of a fountain. On both sides of the fountain different flower beds are located. An official reception hall was also part of the first courtyard, decorated according to the rules of European style. Various documentary sources say that all the buildings in the courtyard had unusually large window openings that go beyond the traditional framework of oriental architecture;

The second courtyard, being in many respects similar to the third, had many buildings of economic purpose:private rooms ruler, medressah, stables, summer and winter mosques.

Each of these buildings has been made in the style that incorporates elements of European and Central Asian architecture. Architects engaged in a detailed study of the structure, emphasize that such a melting pot of different cultures was typical of the architecture of Bukhara in the nineteenth century.