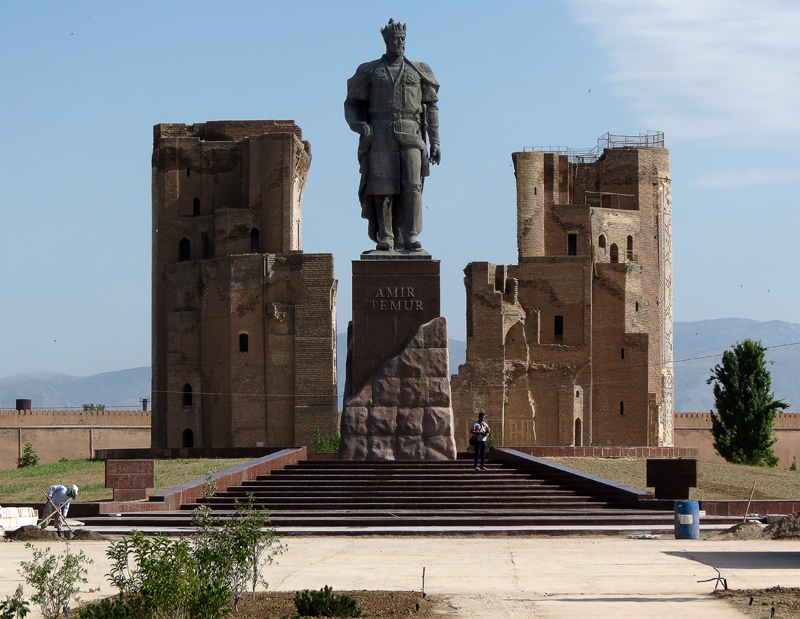 The small city Shakhrisabz ("green city" from Persian) located just 90 kilometers south from Samarkand, at the foot of the Gissar and Zarafshan ranges, at the confluence of the Aksu and Tanhoz rivers. This is one of the oldest cities in the world; according to some facts, human settlements had been existing by 1700 BC. on this place.

The phalanxes of Alexander of Macedon marched here, the satrap of Bactria Bess was captured, anti-Arab movements arisen and the caravans of the Great Silk Road passed there. The ancient Kesh, the birthplace of Amir Temur and the former "home residence" of the Timurids was, probably, greater and richer than Samarkand.

The territory of Shakhrisabz is small, however, despite this fact there are many great masterpieces of ancient Central Asian architecture. Main sightseeings are the Palace of Amir Temur also called as Ak-Saray; Dar-ut Saodat ensemble which includes the burials of Amir Temur’s descendants; Dor-ut Saodat ensemble, Kok-Gumbaz mosque and other unique monuments. The sightseeing tour to Shakhrisabz is one of the must-see places of Uzbekistan. 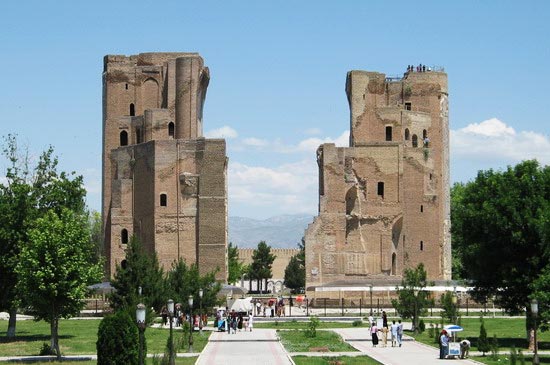 One of the greatest buildings in Shahrisabz is Ak-Saray Palace (Temur’s residence), which in Uzbek means "white palace". After Kuksaray and Buston Saray buildings in Samarkand, Amir Temur wished to build larger palace in his hometown. So, in 1380 the construction of the majestic Ak-Saray Palace was begun.
Construction works, which were conducted under the direction of Amir Temur, lasted for 24 years. Its construction was completed a few months before the death of the great conqueror. Ak-Saray palace consisted of a large number of buildings, including several courtyards, around which were quarters and rooms for public use. Facades of buildings were covered with colored tiles, rooms were decorated with golden sapphire. There was a beautiful pool on the roof of the palace.
Many different styles and colors were used in the architecture of the building. This is explained by the fact that the construction of the grand palace was built by masters from different parts of Asia. Art motifs of different people create picturesque view of Ak-Saray.
In the era of the Timurid Ak-Saray Palace was the largest in Central Asia. In 1570, Emir of Bukhara Abdullakhan II attempted to destroy Ak-Saray palace as it was the reminder of former ruler. However, fortunately he could not fully destroy the building. Historians and restorers of our times did their best in order to restore the palace.

Today, we can see only two majestic portals only. Along with other monuments of Shahrisabz, Ak-Saray is included in UNESCO World Heritage List. 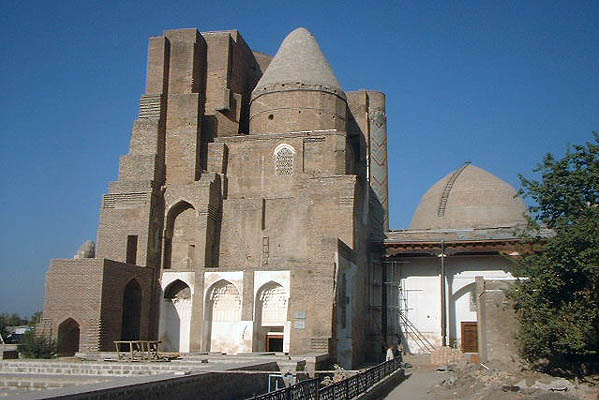 Memorial complex Dorus Saodat means «power receptacle», its construction was begun in 1380. This grand complex was designed for the disposal of Timur and all his descendants. The main facade is a powerful portal with towers, unfortunately only partial contours were survived from it. There is the mausoleum of Jehangir, which is well preserved.

Jehangir was the eldest son of Timur but in 1376 he suddenly died. This sad event was the occasion for construction of memorial complex Dorus Saodat. The mausoleum of Jehangir was richly decorated with gold, azure and tiles. There was garden with ponds. In 1394 Umarshayh who was the second son of Timur died, his body was buried in Dorus Saodat.

Later, Timur ordered to build the tomb for himself but it was not finished. However, thanks to archaeological research, there was found the crypt of Amir Timur. Walls, floors, arches and dome structures are made of light gray marble limestone. There is a marble sarcophagus in the centre, which is covered with a huge monolithic slab. It is one of the most majestic and grand structures of Amir Timur’ epoch.

The complex Dorus Saodat conceals a lot of mysteries and puzzles, but it is one of the most magnificent architectural ensembles of Shakhrisabz. 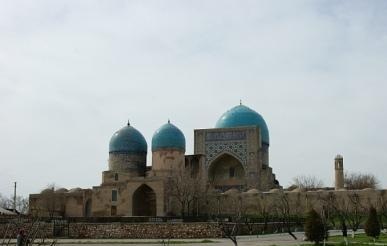 Dor-ut Tillavat complex consists of three structures: Shamsiddin Kulol mausoleum, Kok Gumbaz Mosque and Gumbazi Seiidan tomb. The translation of “Dor-ut Tillavat” into English means “reading of Koran”. All the structures are dated with different periods, but it does not hinder them from being perfectly harmonized. Up to know Dor-ut Tillavat complex is an important religious places not only for the residents of Shakhrisabz, but also for tourists.

One of the majestic and memorial complexes of Shakhrisabz city is Kok-Gumbaz mosque “Blue Dome”. The mosque was built in 1435 on the foundations of an earlier building with a similar layout. The building is located on the same axis with Kulyala Mausoleum, therefore it became the cathedral mosque of the city. According to the inscription on the portal, the mosque was erected by Ulugbek in the honor of his father Shahrukh.
Today, we can see central domed structure with a diameter of 46 meters. It is the only what was preserved from the holy place. The square hall is topped with a beautiful dome. There are inscriptions from the Koran in majolica frame on the outer side of the dome. Once there were held the most important religious services. There are also many famous aphorisms. One of them says: “Power and wealth belong to Allah. Allah is the only who owns domination.”
Thanks to convenient location and its majestic size, blue dome of Kok-Gumbaz Mosque can be seen from almost any part of the city. That is why, Kok Gumbaz is considered one of the major monumental buildings of the ancient Shakhrisabz city.